VOTING DEADLINE FOR REMIXER OF THE YEAR AWARDS: 8 days left 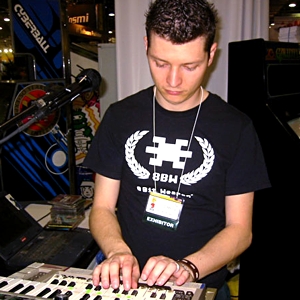 Recently Remix64 became aware of an exciting development in the world of remixing. It appears that a new c64 remix CD is in the making.

Seth Sternberger has been working on a new Album called The 8-bit Weapon. The CD is set for a summer 2002 release. We set out to find more infomation on this project. Keep a close eye on this page for developments on the CD.
Seth Sternberger's personal profile:

I have been programming music for seven years now. I got my first keyboard by giving up my admission to the high school Prom! Its was an easy choice , since at the time, I didn't think I could find a date. lol.

I muddled about for a while...drifting from one wanna-be band to the next for the following 5 years. I have done nine inch nails rip-offs, Depeche up the wazoo, and even erasure bits here and there...let's face it...I was a whore. That is, until my last band crumbled..and I was left with one possible solution...Go SOLO!!

Ever since that day, I've been churning out original tunes, and with a great deal of personal satisfaction. With my whoring days behind me, I felt I was on my way...to where? I had no idea... but I didn't mind!

Eventually I had a few dozen or so tunes, in various states of completion, in my catalogue. I made a Mini Disc of some of them, and brought them over to my friend Mister's house (yes, his name really is Mister, no joke!). He liked them, and asked me to consider doing an album on his BrainScream.com label/site. I jumped at the opportunity! Mister also put me in contact with a few people who might make good collaborators for my album. Through him, I met up with, and collaborated with, an amazing songwriter and musician, Randy Hurst, of Alien Vinyl. Also at this time, I had fallen DEEPLY in love with a young opera singer by the name of Bridget O'Rell. I invited her to contribute to my album, and she agreed. The result of which was "Venus". I also had been somewhat musically mentored by an old mate of mine by the name of Kurt Harding. He had drifted in and out of bands like Bleed and Human Drama. He was available to do some guitar and bass tracks with me on "Frequency Push". By the end of June 2000, I had produced 11 solid tracks for my first release.

All that was left to do was give it a name....I have a very good friend known as "The Alien", not to be mistaken for Randy of Alien Vinyl (He is another alien altogether). Alien is a drifter, never holds a job or a residence for more than a week or two. Everybody knows at least one person like this, no? Anyway...One day Mister asked the Alien why it is that he cant keep a job? "Because...", the alien said simply, " I have unfortunate brain chemistry!" LOL! Well, once I got word of this, I knew it was the perfect name for my diverse collection of unusual electronic music!!

So now I have the album, with title and art ready to go. My debut album, Unfortunate Brain Chemistry, is set to be released June 2001.

What relationship I had with my c64:

I got my first Commodore 64 computer in 1987. The first game I got was Epyx's Movie Monster Game. It was a lot of fun. I loved being Glog, and slurping down city streets absorbing innocent bystanders! lol! My older brother got Defender of the Crown as his first game. What a great game DOTC was, It had everything- adventure, intrigue, and even some hanky panky..er..uh.. romance! Both games had great scores accompanying them. I quickly fell in love with that hot little bundle of joy known as the Sid Chip! I was a hopeless case by the time I got my hands on the Bards Tale series of role-playing games by Electronic Arts....They are my favorite sids even to this day! Other games followed: Adventure Construction Set(EA), Ultima III(Origin), Mail Order Monsters(EA), Tangled Tales(Origin), Paradroid(Thunder Mountain), Black Magic(datasoft), Deathlord(EA), Mars Saga(EA), M.U.L.E.(EA), Project Firestart(EA), Archon II: Adept(EA), etc.. The last game I really lost myself in, was Wasteland by Electronic Arts. That is still the best adventure game ever made! Looking back, I think Electronic arts was like the Motown of Sids, ya know? Seriously! I loved the music that followed each game. In my book, that company could do no wrong! They always had the most innovative, and just plain amazing games in the 80's. I have always wanted to work for them..even to this day! (hint hint)😉 Alas, I eventually grew apart from my commodore gear..and it got shelved.

Then, about a year ago, I stumbled upon a Sid emulator called SIDplay. I thought, "WOW! This is awesome!!!" I could download all my favorite Sids instantly, and listen to them anytime! I didn't have to wait for any title screens to boot!! It was like heaven. After a few months of self indulgence, I started to realize that these tunes aren't half bad by themselves! I pondered what they would sound like if I just added a little of my own magic to each Sid arrangement? ..

That's how I got here. Now I'm recording a full album of Sid remixes. All of my favorite tunes, revamped with just a little something extra. I've tried not to add too much, so that I don't take away from the original sound of each Sid. By this time next year, "The 8-Bit Weapon" will be available for all the other Sid fans to enjoy and share!

The only set back currently is getting clearance from either the publishing companies that made the software the sids are from, or from the original composers themselves. I have contacted all of the publishers & composers of the tunes I'm planning to use. Only one publisher isn't returning my calls(the fact that they are in Australia, and I'm in the United States MIGHT have something to do with it). Everybody else is either working hard towards a solution for clearance, or has already agreed to release the
material.
-Seth =D

Seth kindly sent Remix64 a demo version of Inspector Gadget, which is set to appear on the Album. Here you can download the remix and compare it to the sid which is also included.
(Use Save Link to... option")
seth__inspector_gadget_remix_demo.mp3