Under the microscope: Glyn r Brown 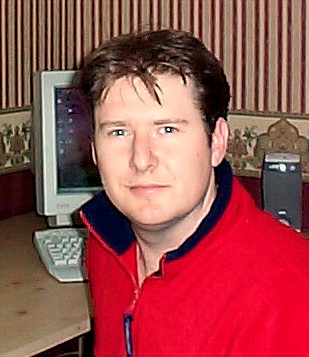 Febuary 2001 saw Glyn first make an appearance with Reyn Ouwehand’s Last Ninja intro music. Although the recording was in low quality it was already obvious that this was a man not short of ideas and ability to carry a melody well. Although synthetic in nature there’s a strong feel of orchestral composition in there too. Little did we know at this time that Glyn many years down the road would underline that style more accurately.

2001 was Glyn’s busiest year releasing almost a remix a month. Glyn’s next mix would again be another Last Ninja track; The Palace gardens by Anthony Lees. A cute little track that unfortunately isn’t one of Glyn’s finest moments and is probably largely forgotten by the community. Listening to it again, it’s hard to imagine this is a Glyn track at all really.

In May that same year Glyn continued the Last Ninja theme in creating a 2001 mix. This was when Glyn would really shine. Combing synth with an orchestral feel mostly but also at times changes into a more dance style. In this remix he’s mixed several of the themes from Last Ninja into one epic that seemingly flow into each other as if they were made to be that way. Add a few sword samples and speech from Karate Kid and there you have it.. Instant hit!

The following month saw Glyn’s style change quite drastically as Ben Daglish’s Blasteroids got a dance make over. Featuring some rather nice bouncy baselines it slowly turns into an orchestral ending theme and finally finishing with the dance style. Signs were showing that Glyn had many styles and shapes up his sleeve.

Glyn was pumping mixes out faster than many could download and the following month another track with Last in the title. Not Last Ninja this time, but David Whittakers Last Mission. The remix is fairly similar to his previous outing, mostly Dance but occasionally a slight feel of orchestral, al be it very loose.

Way of the Tiger followed shortly afterwards in a kind of Oriental Dance style. With just a week gone since Way of the Tiger he quickly followed it up with NOMAD by Fred Gray which features Glyn on the elastic band ;)

Then quickly followed was Rambo – First Blood Part II by Martin Galway although very similar to the original Glyn showed you can make quite drastic changes to a sid’s structure and come away smelling of flowers. Glyn’s style however was mostly consistent by now in producing some of the most enjoyable 80’s Dance/pop.

During a time when Myth remixes were in abundance Glyn would be no exception to produce a remix of this music. Again, as in previous months the Dance/pop 80’s approach was now becoming the norm for Glyn. That was in September 2001 and would be his last mix of the year but not his last excursion into myth.

In less than 8 month Glyn had produced a massive 9 remixes. 2002 started off with an entry into a competition held at remix64 where the mission was to remix 3 different Sids into 1 track. When the remix64 team learned that glyn was working on a track for the competition we thought the winner would be him instantly. However, Makke had different ideas and created a track that had surpassed anything he had done before which relegated Glyn to Second. Glyns mix on this occasion was Antiriad, Warhawk and Myth.

Less than a month later Glyn returned to an old track and re-blasted it. His return to Blasteroids heralded a thicker more complete sound to glyns work. The track was a much more complex affair and although still In 80’s Dance/pop this track was a significant quality improvement.

Up next was the last dance track from Glyn.. He was about to change and boy would he change too. However make no mistake he would finish on a high note. Rubicon is full of life, energy but also shows signs of a more subtleness to Glyn music than what was previously known in his work.

Then all went quiet from Glyn for about 4 month. And the reason for that would soon be known and devastatingly so. From out of no where Glyn produced what was considered for it’s time pretty much unbeatable. The track: Firelord. The Style: Orchestral. Seemingly Glyn had suddenly matured, moved away from Dance and hit the world with what was a groundbreaking achievement. For nearly two years Glyn’s Firelord battled with Machinae Supremacy to gain top spot at remix64.

The amusing thing about Firelord is that the start is gentle and soft and gives little indication what is to follow so few would have realised that was about to come.

A few months later, we’ll have some more of that thank you Glyn as he produced another killer track. This time the music from Thomas Detert’s Gordians Tomb Adventures which matched at the very least the work on Firelord.

Suddenly, after nearly 2 years of rapid remix releases Glyn vanished without a trace. 2 years and month later Glyn shocked the world AGAIN! Continuing in the same vein as firelord and Gordians Tomb came Rastan but this time even better than before. Showing better skills and a wholly better sound Glyn did it and stormed to the top of the charts, this time it would be uncontended for nearly a year.

He came, he kicked ass and then promptly vanished again. A year on and up pops up another surprise. Glyn in 2005 produced another mighty effort with the little known The Recovery by Lars Hoff. Although not featuring has highly as Rastan his latest track shows much more maturity as a musician and also shows a more gentle side to Glyn. Has he gone soft in his old age? ;)

Glyn over the past 4 or 5 years has impressed me no end, not just because of the quality of his work but also for his modest approach. Glyn never brags about his work and that’s an admirable quality. Glyn’s knowledge on music isn’t great and to quote a remark Sharp? Is that the black key above the white one? What he lacks in knowledge he more than makes up for it in his natural ability to simply know what feels right and sounds good. His ability to carry a melody is rare and no amount of teaching can learn you that. It’s simply a gift he’s been born with.

Glyn has also done remixes of Deliverance and Storm both in 80’s dance/pop style on remix64 volume 1 and also Times of Lore in his now typical orchestral style for remix64 volume 2. Both CD’s are available at c64audio.com.