The place for musicians to share their knowledge and ideas about music and remixing, and to post WIP snippets and feedback. Also suggest tunes for remixing, here.
Post Reply
7 posts • Page 1 of 1

Buy this issue. With other special anniversaries, it does seem life as we know it began in '85:


For their 30-year anniversary, they even recreated a home recording session using only the old gear. Rather they than me.

I have a lot of this kind of gear - just not the patience to configure, when they're not perepheral to a PC.

Not surprisingly, gear shapes the sounds as much as the artist. Hear the world of difference between those Beatle surround remixes and the original '60s bounces.

While Steinberg software coupled the new posh computers with tape recorders and fancy mixers, the 8-bit machines also saw Advanced Music Studio. For £50, this also handled MIDI I/O and editing, notation and direct manipulation of the computer sound chip - something fashionable today and still a mindblowing activity for machines with just 64KB of memory.

Seems in one fell swoop, we had home recording as we roughly know it today, with computers becoming the samplers and synths themselves during even the 80s.

Thanks for posting the article it takes me back...

In 85 a home recording setup as pictured would have cost you quite a bit, midi really was the new tech like the new computers at the time and the DX range of synths reigned supreme. It comes as no surprise that the article summary has an air of back lash towards the 80's sound but with the constraints some great music was and still can be made with those instruments today. KLF once said in 1988 that someday you will be available to write a song in a box and they were right - a DAW but I still don't think it makes for better music if it was then the music industry wouldn't be in the declining state that it is today.
https://martinkdodd.bandcamp.com/
https://soundcloud.com/martindodd
https://www.youtube.com/user/C64remixer
Top

At last the past meets me in the middle with these anniversaries! If I was back in the day at my age now, I would have plumped for the cheaper recording solutions using a smaller tape deck and the Commodore 64. Mind, even with all that on offer, I would never have done anything with it. I'm far too laid back to push myself through the usual grinder to get noticed, so without the Web as a game-changer, there would have been little desire to buy anything.

I probably would have done as I actually started in the studio to get a grounding: record a few local mates and have them track any odds and ends by me as part of the fee. Then perhaps I could have sold a tape through a parish magazine rather than gig, as I damned as hell couldn't get it together to actually perform competently in any reality, past tracking and doodling.

www.soundonsound.com November 2015 In This Issue 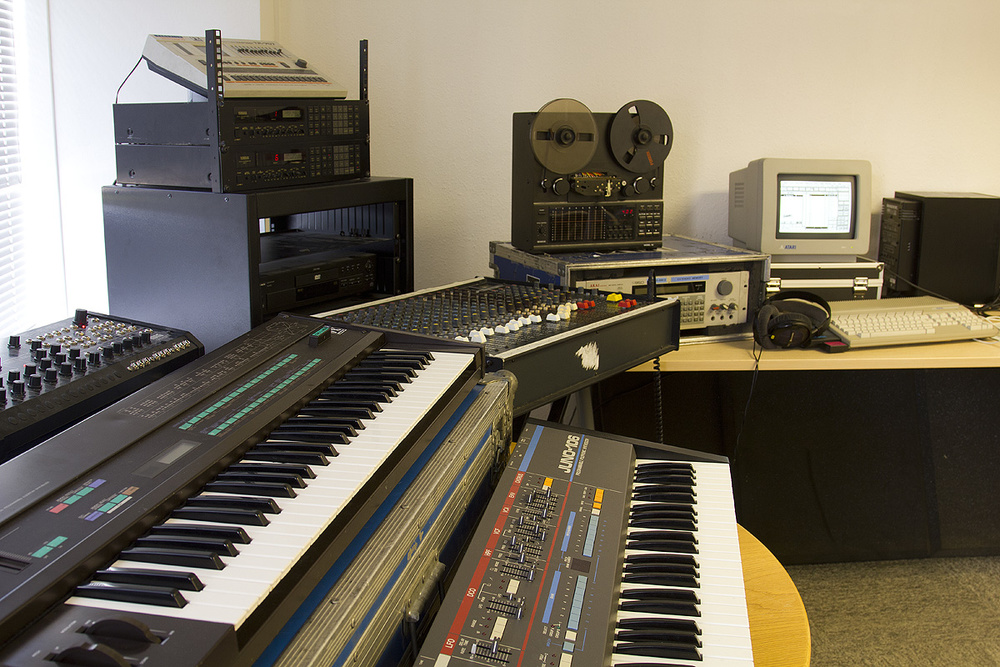 ..And this is old hat today? Despite gargantuan fiddliness, the expense and far fewer features, it's still hardly the caveman 70s.
Top

Exactly - That gear is hardly old hat. I think the only difference between now and the 80's are the way we record music. We now have the ability to use more FX plugin's and record on hard disk which in 1985 was very expensive and limited but those instruments pictured are still sort after and in vogue today.

When i was learning about electronic music in high school it was a new subject and the music teachers waxed lyrical about the wonders of midi. I think in some way looking back I was taught in the 80's that midi was the holy grail of music making and in some ways it is but not so in others which it took a number of years for me to discover. If I had a time machine like biff in Back to the Future I'd probably tell myself that midi is useful for some applications but it's all about improving your playing ability and it's not about relying on computers to create. I think in the 1980's if I'd been older and on the budget I would have had, I'd have ditched the idea of midi sequencing and got a few guitar FX pedals, an analog synth (Sh101 we had one in school), a Dx7 synth, a drum machine, a compressor for mastering etc, 4 or 8 track tape machine and wrote little ditties for mastering on my Amstrad my hi fi. Basic I know, but without a DAW that would have been the most cost effective method and given me the best result.
20 years later they'd have been showcased on the Internet! Who knows maybe even a c64 remix done in 1988?
https://martinkdodd.bandcamp.com/
https://soundcloud.com/martindodd
https://www.youtube.com/user/C64remixer
Top

Yup, it's the production values possible with PCs which are the most obvious quantum leaps. But the gear there can still compliment the newer things quite happily, if they still have unique or relevant qualities. I think even SOS fall into the trap of saying 'Oooo, isn't it fiddlier on the old stuff and aren't the features lacking.' The point is that computers, any computers, really opened new horizons - as long as you could work them. Though I think they also tried to be as amazed as anyone would have been, new.

Excellent tracking was already available before additionally excellent PC interfaces arrived for us. I have an old domestic format open reel tape from the 70s, obviously just a two-mike natural stereo job in a community hall, for someone's band recording. But it sounds wonderfully warm, rich and involving enough to never matter. And it certainly competes with the SOS song, even though they may not even have used a compressor on my tape.

I feel the guys used a dodgy quarter-inch 8 track because emulating the hire of something better would have wiped out most of the difference for us to pick apart. I still prefer today mind you, though a 30-year look back now is far from gazing at the dinosaurs.


Plus these thoughts are wonderfully underlined by my Oxfam find of 34 year-old recording magazines. If you had the money anyway, it was still an Aladdin's Cave of techie wonder down the shops.

One of my favourite songwriters (Olly Knights from Turin Brakes) found an old reel-to-reel tape recorder on eBay, refurbished it and recorded a whole album at home - helping him get past a severe case of writer's block.

So there is something to be said for trying a different method. These days whole albums can be made at home with very little equipment (look at C Duncan with his album Architect, nominated for the Mercury Prize).
--Anyone want to remix my SIDs?--
merman1974 on Twitter, Steam and Xbox Live
Top
Post Reply
7 posts • Page 1 of 1

Return to “Work In Progress, remix suggestions, and musicians talk”