by RobinsonMason
I'm relatively new here but want to offer my support, Chappers.

When things get me down I find a good game, book or other form of escapism (including writing fiction) helps me to forget. I needed a lot of it when I lived alone in Japan for almost a decade. In retrospect I was quite lonely and an angry young man, to boot, with a bout or two of depression and with no family and only a few close friends to lean on.

I've recently been reading R.A. Salvatore's Drizzt series, a guilty pleasure, along with old Shadow and Conan pulps. The Drizzt series has a generally uplifting tone (in an occasionally very dark setting) that might be a nice change for you if you like Fantasy.

What was the worst for me in retrospect was hanging out in bars in Tokyo, listening to moody music, or wandering the streets. While interesting (and in a way fun to wallow in "the blues"), it only served to reinforce how alone I was, so I often took to just staying home nights and reading/gaming/writing.

It's very much appreciated, thanks. I do turn to the support of my girlfriend and my Mum, who are tolerant and helpful with me, especially with the low moments. I'm having slow progress with my rehab back to some kind of normality, but it's getting there.

I keep my moods up by having a bit of gaming too, saves me being on the anti-depressants I guess.

by Lagerfeldt
Just saw this now, I hope you're doing better mate.

Doing a bit better at the moment thanks. Have a bit more motivation and inspiration to get back to something approaching normal, now I've recently become a father for the 1st time.

Will be some time yet before I'm sorted in myself, but I'm not giving up.

Chappers wrote: Doing a bit better at the moment thanks. Have a bit more motivation and inspiration to get back to something approaching normal, now I've recently become a father for the 1st time.

Weee, congratulations! While it can be hard work it's also one of the most satisfiying things in the world, especially when they get older.

by FunkyM
Just found this thread, nice to know you're coping.

Best wishes from me.

FunkyM wrote:Just found this thread, nice to know you're coping.

Best wishes from me.

Thanks very much, very kind.

On a side note, I know very well that there are people a lot worse off than me in the world, so fortunately don't have head up arse any more.

It's slow going to sort myself out financially, got some debts to sort out (especially one or two always on my mind) but it's taking a lot more time than I expected. Starting something called a Debt Relief Order very soon through the CAB, light at the end of the tunnel or something.

Hopefully to also get a job soon and get back to something approaching normality.

Fatherhood doesn't seem to be going too bad as well. Doing my fair share of feeding and nappy-changing with Rebecca, she's 7 weeks old now and getting chubbier all the time.

by Vosla
Good co-production on that kid.

And it's nice to hear that you are through the valley bottom, mate!

by merman
Hey, glad to see some good news in this thread.

And I saw this and thought of you! 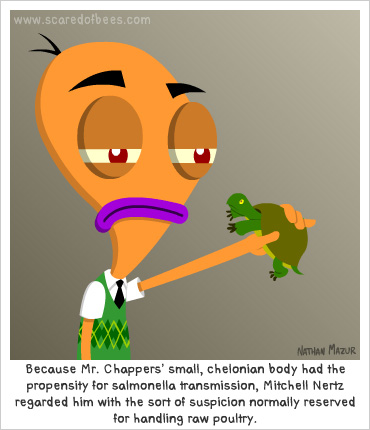 by Chappers
Sorry to everyone that I have been away from the messageboard for some time. It's been nothing personal to everyone, it's just been a difficult time mentally sorting myself out as Ive slipped back into depression on and off since the last post.

Kinda needed to back off from the messageboard and SLAY Radio while I attempt to put things right personally (especially regarding money matters). Still jobseeking (and not getting the breaks so far) and keeping it together with fatherhood as well. It's on my mind to try to improve day-to-day life before my daughter gets much older (turning 1 on the 22nd April so at least one highlight to look forward to).

Anyhoo, hopefully the next update will be a more positive one.

by Marcel Donné
Aawwwww, what a wee dotey!

Hope everything works out for you Paul. One step at a time and all that, you'll get there in the end I'm sure of it. Just take it easy and enjoy being a Dad while they're small

Marcel
All times are UTC
Page 3 of 3