Was the Commodore 64 a quantum leap?

Talk freely about the scene, the world of remixing, or anything off-topic unsuitable for the "Fun Forum".
Post Reply
17 posts

Was the Commodore 64 a quantum leap?

Given the VIC and SID chips, there was certainly a lurch forward in technology, only finally completely exploited by the machine's commercial end. Mayhem In Monsterland and other swan song classics on top of great demos show this.

I'd say yes and no. It was a true envelope-pusher allowing users to flirt with approximations of GUI, DTP, music sequencing or graphic design on top of progressive game mechanics for a comparatively low price. It was the smash hit computer.

Yet it took the Amiga, only bought by Commodore, to help bring the future

When i look at hardware of past and i think of say the 3DO, it was a huge leap over the SNES for example in handling texture mapping for example, but it's 2D abilities were way lower than the SNES as SSF2T proved (less parallax scrolling in backdrops) and Jez San was very vocal about.The Playstation, powerful as it was in terms of 3D, could'nt match the Saturn in 2D, so there always seemed to be a comprimise made somewhere.

I went from an Atari 800XL (due to lack of software etc) to the C64 and fell in love with the SID chip (better than POKEY IMO), yet games like Elktraglide, Dropzone, Rescue On Fract.etc were 'lesser' experiences for myself due to the A8's CPU power and range of colours.So a step in right direction for sure, but not that big a leap.I then bought a 520STFM...1 step forward, 2 steps back...
Top

Somehow games on the A8 always seemed "harder". Part of that was the very metallic pokey sound, but the pixels and colours were sharp and vibrant...
Won't somebody PLEASE think of the children?
Top

Chris Abbott wrote:Somehow games on the A8 always seemed "harder". Part of that was the very metallic pokey sound, but the pixels and colours were sharp and vibrant...

Dropzone plays faster, has more foes etc and seem to recal Archer saying folks should use the C64 version to practice on, then play the A8 version.Rescue On Fract.i found too sloth like on C64, so it soon got boring, much prefered the faster A8 version.

Music wise, would have loved to have seen more Hubbard stuff on there and seen what likes of Gray, Folin etc could have got from Pokey.

Sadly A8 suffered a lot of games that really had poor conversions (Arkanoid, if they'd used better colours, fixed ball movement would have been far better) or really were'nt suited to machine, due to lack of PMG/Sprites compared to C64 (Green Beret for example).
Top

In Germany, the C64 brought the breakthrough what the Atari consoles started.
There is only my mother left to die and then I'm free to go (cat is dead per 9th August 2019).
Top

...Well maybe not, Vosla. I said the Apple 2 had no real predecessor. But look at this: 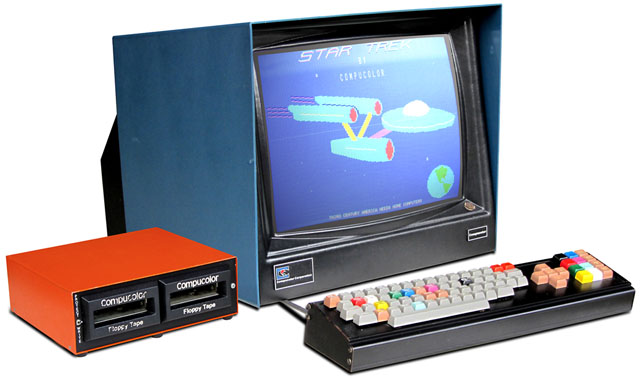 
The Compucolor was as much a quantum leap as the Amiga, with a properly powerful system, colour graphics and BASIC in an readymade package. In 1976.

This started it, in terms of posh, complete units in the domestic market. There was only the Altair and crap not much better before. Even the Apple 1 wasn't all that smart.
Top

Only a very small fraction of people must have been able to get their hands on them here, as I never heard of somebody having either an Apple as a "homecomputer", nor the model in your screenshot (actually never seen it before) in that time. Only speaking for Germany from the perspective of not-over-the-top-rich people. Hardly as widespread as the Atari consoles or the smaller CBM PCs (which had some spread through being used in schools a lot). Seen some clubs popping up with VC20 or even ZX81 but the C64 was a mass phenomenum like no other before.
There is only my mother left to die and then I'm free to go (cat is dead per 9th August 2019).
Top

Oh I agree the mass computers were the cultural kickstart. If not for Jobs or Tramiel in America, plus Sinclair and others in the UK, there wouldn't have been the boom so quick.
Top

It was. The mass spread, mass of softwares and most obviously the SID chip that influenced much more people in a way or an another than they would realise even to this day. I am sure most dubstep stars listened to SIDs a lot.

Well I can definitely agree that the 64-SID partnership delivered a breakthrough in computer music. It started that whole scene, right down to the kids who reputedly bought games purely for the Hubbard or Galway synthtracks.

We got a Commodore 128 when I was in grade school. Dad got it used from a guy at work around '86 or so and it came with a big box of disks and books. I came to discover that these disks were all pirated software from BBSes and learning to run the programs inadvertently introduced me to the demo scene (I would sometimes load a program just to watch and listen to the badass intro music added by the cracker).

Then came the Amiga and, well, the scene was cemented forever. Even the ZX Spectrum was relaunched with a very SID-like sound generator for similar demoscene fun.


But whatever the line, we can all agree on one thing....

The ZX Spectrum, the C64 and the Amstrad all had their role in making computing available to mid-80s kids in the UK, but I'd sadly argue that Sinclair was more important up to 1983/4 because the Commodore 64 was so much more expensive in the UK and the Speccy was affordable. I'm not exactly sure who bought Amstrads, but I'm sure there's a reason they didn't buy Speccies or C64s...
Won't somebody PLEASE think of the children?
Top

Like there's a reason people were voting SDP or Liberal you mean?

I agree, too, with the Spectrum point. As a machine it was awful but as a couple of firsts, it was amazing: First properly affordable friendly, colourful computer. And first bit of non-console wizardry to be cool in itself, the more sophisticated coffee-table pleasure toy the Playstations and Nintendos are now.

Any computer was exciting but the Spectrum was unashamedly geared towards pleasing the little brother. And many kids credited the Spectrum for opening the door to greater things.
Top

Even the burpy slurpy sounds had a certain appeal. I think it was more to do with encountering them at a time when it was all new and exciting. Though I still wanted an Oric over a Spectrum... for a while, at least! The Atari 400 was my first computer by accident (it was just the first one that came up for sale), and I came across the Commodore 64 by virtue of friends owning it.

I don't think I'll ever feel as excited again as I felt in those days, but then that's all to do with being a teenager and dopamine levels!
Won't somebody PLEASE think of the children?
Top

This was mostly to do with one-keystroke basic keywords, though. A bit of a narrow focus...!!
Won't somebody PLEASE think of the children?
Top

The Commie was certainly on the ball for its day, outshining other computers in ways appreciated later. For example, it was a 'windows' PC. I do appreciate the sight of mixed mode screens, with text mode boxes overlaid onto bitmap graphics.


Yup, it was all new alright. So many concepts were in the average home at once - video recorders, colour telly (plenty were still B/W by 1980), anything digital. Even Mr. Average's washing machines and decent-size freezers. I'm glad I was only a baby during the dark days when just the basic stuff was so expensive, that's all most people had.

In the whole picture, it looked like everything was happening first and brightest. Gadgets came down in price, with books and records getting cheaper still. Outside amusements were coming home and nobody had to spend Sundays bored all day any more. Remember those?

Mind you, the '70s rich kid had the rough equivalent of our later cascades.

Though even I still enjoy some 'first time' experiences, in a sideways style. As I've posted here, it's the first proper time even junk shop computers don't leave you wanting in the studio. First proper time there's been a retro industry, simply because we passed a point where home leisure tech became essential and improved. And there was more of an option for everybody.

A good open reel is a good open reel. You can still keep your laserdiscs, CDs and tapes as part of a timeless collection. And especially in America, the NES is a supergod of a legend. Who'd throw away theirs now?

Old stuff is no longer just the useless crap and we long since passed the days when a radiogram was all you had as a hand-me-down. Who could have had such a comprehensive rig 30 years ago?
Top
Post Reply
17 posts