An Interview with Axeman

Axeman is an excellent guitarist that has to date provided us with 2 well crafted rock remixes. The reason for only producing 2 remixes has probably got something to do with a rare and largely unknown infliction. Read more about this and his music within this interview.

What are your favourites c64 composers?

I have to be unoriginal and say the typical: Hubbard-Galway-Gray combo. 😊 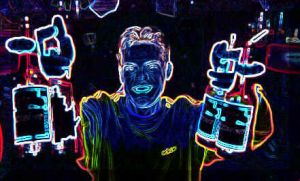 What are your favourites sids?

Why did you start remixing c64 music?

I'm an old scene-dude and I had been thinking of doing guitar remixes of C64 songs for years. But not until spring 2001 did I actually start doing music. I was coder in the good old days... Actually I became dramatically ill (hypersensitivity to electricity) in autumn 2000. After moths of dramatic trials and suffery in spring 2001 I started to feel a bit better and was physically able to use computers again I just felt that I should do something creative. So I decided to make a few remixes and write a book. The remixes hit R:K.O and I good lots of positive feedback. Thank you people! Now the book is ready too and hits shelves this month in Finland. Soon it is time for more remixes.

This is probably not the right forum to discuss hypersensitivity to electricity but I just want to say that when you hear that some people get headache from cell phones and have problems with computer monitors that be gentle with them, because they are telling you a true thing. It is not infectious! Don't be afraid of us. We are not crazy people, we are just more sensitive than others. I for example have 21 years of background in computer programming but today I cannot use normal CRT monitors anymore. I have 2 university degrees (comp.science and signal. processing) and I have worked in mobile phone industry but today I cannot hang around cell phones. Basically I spend my time home and use computer maybe 1-2 hours a day. If I use more I get severe pains in nervous system. Every single piece of electric equipment that I use must be specially designed for electrically handicapped people meaning special grounding and reduced emission levels. There is scientific evidence behind the phenomenon too (feel free to contact me for further details). According to the newest findings it can be estimated that probably 1-2 percent of the population of the western countries will suffer similar pains than I am if the emission levels of cellular base stations are not degreased by 1/100th parts.

I don't want to foment panic, but clearly state the facts of the case. Wouldn't you do the same if you were me and you had the information I have? So if anyone is interested I can supply with more info and weblinks etc...but please do NOT actively think about radiation around you! Radiation harm only very few people but one can think he is affected if one thinks about it 24 hours a day. What I'd really hope for you to do is when you hear your friends go: hey that hypersensitivity stuff is fucking bullshit you can correct them then, hopefully? 😊 That day will come when your friends say it. They will not believe it before they personally know someone who is affected by radiation.

You remix people don't personally know me but you can dl my remixes and say: OK, not bad and you can assume that I am at least partially sane person, because insane people would not be able a) to enjoy C64 music and b) to remix them intelligently. (actually, my Vertigo remix is not very intelligent, but nevermind that 😊 I would estimate that it takes 10-20 years when this sickness is generally as known as AIDS or MadCow disease is. So basically I'm showing you people the future. And future is pretty ugly I can tell you that much....

Because of your illness, how difficult is it to compose music if you can only use electrical equipment for a maximum of two hours a day?

Of course it restricts things a lot. You see that effetice 2 hours is when I have only this eqipment on: a) monitor (flatpanel, brand MultiQ, the only fully emission free monitor on the market), b) computer (as far away from me as it can, about 2 meters) c) my keyboard (LiteON SK-7100, battery operated, only keyboard I can use) But when I compose, I need to turn on also my audio system and my Marhshall Pre-amp, that's like 2 more electric adapters operating in the room which mean that the amount of time I can physically be in the room is max 1 hour. But I'm really happy it's even that, because about 6 months ago it was 30 minutes.

So I guess I'm making slow recovery. Maybe next year I can use my equipment for 4-5 hours. Hopefully. 😉 Oh yeah and I forgot that I have to hold electric guitar that has small currents going on in the strings too. They are minor currents but I can feel them. The problem really is that sometimes when I get carried away I tend to sit with computer for so long that my nervous system cannot carry the pain signals anymore, that's when I can sit for 10 hours without ny pains. (That's prolly the same thing that your nervous system does when you're drunk, you can fall from Empire State building and you won't feel a thing... 😊

But the drawback of those monster-sessions is that I then cannot use computers at all in the next 3-4 days. It kind of hits back in the body really really hard. I feel really really weak after using electric equipment too much. (By weak I mean a state when a person cannot raise one's limbs...)

Why do you use guitar on your c64 remixes?

Simply because it has not been done that much. There's really only Puffy and Press Play on Tape who have done anything (except for Nexus by R. Ouwehand) sensible with guitar. I have to rely on guitar pretty much because that'a about the only instrument I can say I can play. Drumming and pianostuff is more like guessing. 😊

Puffy64 also uses guitar in his remixes what are the key differences between your two styles?

OK. Puffy is a great! There are many differences between us. He's a lot better rhythm guitarist than I am. He does fantastic job on arranging the guitar in the mid-area and I'm not talking about mixing. His rhythm is not in the back and not in the front either. The only thing (sometimes) that I dislike is the sound. His use of synth is more advanced than mine. I consider myself perhaps a bit advanced player what comes to technical ability so I'd be expected to remix complex stuff more accurately.

How do you get your inspiration?

Walking in the nature and doing martial arts. Meditation. (no kidding)

What non c64 music do you like, and does this reflect in your music?

I'm really into the stuff that Jeff Beck, Steve Vai, Joe Satriani and Tony McAlpine do guitar. It definitely shows in my remixes. I try to surf somewhere between my own style, c64-style and guitar shredding style. It's interesting place to be actually. At the moment I'm remixing Hawkeye which I can test my technical playing. Also I have a pal who will join me to play synth and drums. Let's see what happens.

What equipment/software do you use?

I use Yamaha SW1000XG soundcard and Marshall pre-amp for guitar. I don't need any delays or effects because the soundcard can handle everything. At the moment I can use about 1 percent of the functionality the system allows. There's lots to learn.

How best have the tunes you have remixed lend themselves to the guitar?

At the moment I have released only 2 remixes: Delta and Vertigo. Delta suited guitar perfectly. Some people actually didn't recognize that the midpart of delta was played with guitar. There were a bit of pads yes, but the main theme (which I made up, I always add something extra) was all electric guitar. Vertigo suits guitar very well too. Thinking back I regret releasing the version I did. It was mixed badly, had too many things going on and people really didn't get the joke it contained. I really don't see any point trying to mimic SID with guitar 100 percent so you might expect more weird stuff from me. 😊

What other tunes are you looking to remix in the future?

As I said, Hawkeye. I have tabbed (to tab= to make a tabulature aka guitarists notes) of many songs. I won't release the names so they will be surprises. One experiment that I'd really like to do is to make a potpour of c64remixes with added guitar melodyline and backing track. I have tried incorporating heavy rhythm to for example on Instant Remedy's Last Ninja (extended) and boy does it kick the song out of the room. Total killer combination.

If there was a tune you wish you could claim as your own, what would it be and why?

What are your likes/dislikes regarding remixing c64 music?

I dislike songs that sound like they are ripped with some sw and then added mididrums. It was actually a big disappointment to me to know about sid2midi because before that I had thought that everybody transcripts the music by ear (like I still do). Sometimes I don't like the hostile attitude of the scene, people getting angry on the list etc. I think we have lots of commercial potential if we push this thing forward together. And I don't mean that I do this to get money or to get laid (laughs.), I'm the most anti-commercial man you could think of. This should be a fun hobby. And it is if we make it. BITLIVE was a good example of the good sides of the scene. I felt sad that I couldn't attend it due to my sickness.

What is the most difficult part about remixing c64 music using a guitar?

Transcribing the song by ear definitely. That's a slow but rewarding process. Some may call me stupid but I learned to play the instrument by ear and that's what I stick with.

Who do you think gives the scene the biggest boost?

Lastly what would you like to say to the scene?

Let's be a bit more supportive and say good things when they are due. We are very very special people with special gift so let's not spoil it. Viva C64 music! 😊

Well it opened my eyes, i hope it has done the same for you. This infliction should be made more public. It made me appreciate his music even more so after hearing about this.