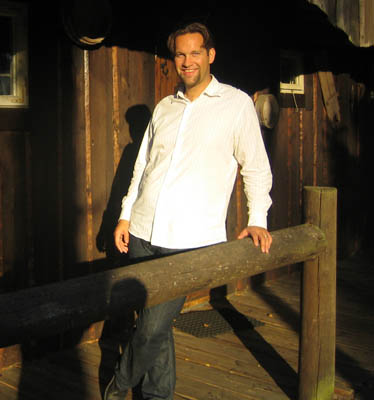 It’s all about Creativity. That's the key reason why someone like Magnar has spent his last past twenty years making music for the world of demos, games and beyond.

His claim to fame started on the Amiga demo scene in the early nineties, where he released most of his best musical work up to that date, in the music disk Mirror by the then already-legendary Norwegian team Andromeda. Then moving over to the hyper active TBL, Magnar was behind the main soundtracks of the chart-hitting demos Darkside (1996) and Panacea (1997).

I was amazed by what was possible to do with computers, and all the great productions intrigued me into getting more involved in the scene community, he says.

It all started back in 1987, by a matter of pure chance; he got hold of a copy of Chris Huelsbeck's Soundmonitor. He was literally hooked on his new-found interest in chip-based sound, and his sisters vividly remember a 13 year old Magnar making music all night long and going to bed at sunrise! The pattern based audio sequencer posed a true challenge to compose large scale songs through the sound chip of the C64, using drums, bass, melody and chords with special arpeggio techniques. So Magnar moved over to the Amiga, which turned into his most active scening period (1990-97) where he composed around 500 songs of various genres; from diskmag melodies to chip tunes, from bouncy demo or game tracks to full-scale acoustic tunes.

In 1991, Magnar won his first freelance assignment from a Switzerland-based Amiga game developer. This set his mind on turning his composing hobby into a lifelong career. Whilst being at the utmost peak of his scene years, he was headhunted and offered full-time employment at MagiCom, the game company which in coming years evolved into FunCom. Being only 17 years old at the time, and still attending school, the offer was kindly neglected by insistence of his family.

In 1995, Magnar took the challenge of organizing the year's edition of the infamous Norwegian seasonal prime event, The Gathering. It was frightening and a speed-trip all in one goes! 5 day of marathon non-stop hard work without sleep. Apparently it didn't go as smoothly as hoped from day 1, but with good help from dear friends things really improved as the event rolled on. All in all, the event was sold-out with a total of 1500 paid tickets. The visitor’s feedback was that they were happy about their stay at the event. That felt very comforting and made it all worth it.

During this period, Magnar was also playing in a band. It was a great way to interact with others, and build up songs by not controlling everything yourself. We did go into studios and record a few songs, and we even got some releases. But my experience is, even though playing in a band was great fun and we learned a lot from each other, it didn't pay back compared to the time and efforts invested.

Subsequently Magnar moved to Oslo in 1996. While being very dedicated to his work as an IT-consultant, spare time for making music became very limited and restricted. Years passed without any new releases. He had lived the demo scene dream. It was time to get rid of the reptile skin of his former nickname Lizard, and metamorphose into Magnar. I think Lizard was a nice pseudonym, but I personally cannot relate to it anymore for the new music I do outside the scene. My goals have also shifted towards more commercial music, and I believe that Magnar has a better commercial value than Lizard.

Magnar moved over to Sweden during the summer time of 2000. Where he settled down to live together with his wife and two kids. In 2008, he finished building his privately owned music studio called Garage Outputz, which shows the level of his passion and inspiration for composing new music. The studio also doubles up as his office, where he can be creative in different ways with computer art. Magnar's ambition is to compile a CD album and delivering a lasting impression to listeners all over the globe. I am composing a lot of new tracks, and when I feel satisfied, I aim to release that to the general public, he says.