The battle has been long my friend.. the work intense.. where the dreams of many have meant so much. I'll take you into another world, I'll take you into another dream. Follow me and take my hand while I lead you into a realm where your imagination is real. Your hopes, your fears are all realised in one dramatic epic. Come, come my friend and follow me - let me take you there... let me take you to this world, let me open the door and take you..Into Eternity.
Mastered & Engineered by Thomas Detert at AIRBASE MEDIA Studio,Germany.

Except Tracks: 8, 9, 12 mastered by Jan Morgenstern at Wavemage Studios, Germany, 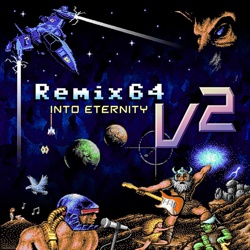 open_in_newOther Work By Jan: (Title: HYMN TO THE WIRES)

open_in_newOther Work By Markus (Title: GATE TO ANOTHER WORLD)

What the PRESS said...

..Here and there a lovely guitar solo shows up, as well as a majestic version of Barbarian - Superplay (Swedish Paper Magazine)

...A Great mix of Barbarian, Congratulations to Carl. (RICHARD JOSEPH) ...Its so much BIGGER and BOLDER than I expected. (Subzero) ...It's an excellent cd. Not to be without. (Octave Sounds) ...As soon as Larsec's track started I just knew I was in for something special here...\[You guys have a CD that you should all be proud of I tell ya!...\](DJ Skitz) ...The technical level is second-to-none and many of the tracks have not fallen on my ears in a long while. (Mayhem) ...Remix 64 volume 2 - 9.9/10. Close to perfection. (Merman) ...It's seriously epic! (Chris Abbott/c64audio.com) ...The whole album has an epic fantasy feeling and production. (Bjorn Lynne) ...I think it's safe to say this is the best C64 album released in 2003 (Jan Zottman/Immortal 2 Producer) ...My thanks to Neil, the musicians and everyone else who was involved in bringing this fantastic CD to the public (Hoomish) ...Love Everything.My neighbours are in for a treat tonight. (Marcel Donne/Sidologie) ...More power to Neil for going in this direction on R64v2. Fist2 is beyond words. Top job, Maestro Holler. (Jan Lund Thomsen/RKO) ...All in all great value for money and many hours of entertainment. (Nigel Craft) ...Im dead impressed, It exceeds expectation. Quality stuff! (RetroVertigo) ...sets a new standard in remix CDs (Dr. Future) ...Very impressive! (http://www.dhs.nu) ...Incredible! This must be the most professional c64 cds EVER! I love it. (Max Levin) ...You guys should be working on movie soundtracks yourselves. After hearing that cd i wouldn't be surprised if some of you already do. (Fersando) ...I think it's safe to say this is the best C64 album released in 2003 (Jan Zottman/Immortal 2 Producer)
shareShare
shareShare