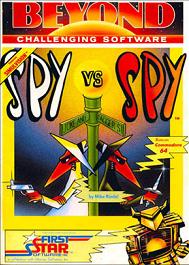 More remixes of Spy Vs Spy

The inspiration for this track was 007 and Counting- a track from the Diamonds are Forever soundtrack by John Barry. It was done using mainly a Korg I4s. The track was put together quickly. The harp ending is actually a mistake. The onboard sequencer didn't delete that part and when I came to record on that section, I came to it and I felt it sounded OK so I left it in.

Skitz shouts:
Not too much wrong with this remix but it needs mastering. Great idea with the accordian lead...

Waz shouts:
An interesting idea, but the execution lets it down somewhat. It plods along a little too slowly for me, and some of the instruments stick out a bit too much in the mix. The accordion lead is a different idea and on the whole that works. Tweaks needed

prowler shouts:
Nice, but some of the instruments ruins the feeling.

grytulf shouts:
Like the instruments choice.. But the samples are a bit to unprofessional.... Sounds like a MOD/XM

weasel shouts:
Hmm.. Couldn't really decide between grey and yellow now! It's a nice idea here but it somehow couldn't catch me in general. Maybe it's a bit too slow or the mixing isn't that well to get me into it. Not really sure. Although the accordion lead is a nice.

spellcoder shouts:
Nice, but a bit slow for my liking, causing it to have a tragic/sad atmosphere. (was that intended?)

xgener8or shouts:
It's ok. Unlike some other people, I really don't like accordions, so for me that was destroying the whole thing

eliot shouts:
Stings & "accordion" sounds steril, so they ruin the tune a bit...:-(

LaLa shouts:
Accordion sound is a nice idea, but overall I'm not very impressed by it. Like with many other remixes, the basic idea is good, the execution is so-so.

omoroca shouts:
Starts promising but ends experimental. I like the way the chords are much more explicit than in the original version, gives the whole thing a Cobra feeling. But the climax that the first half of the tune is working towards is missing.
Reviews