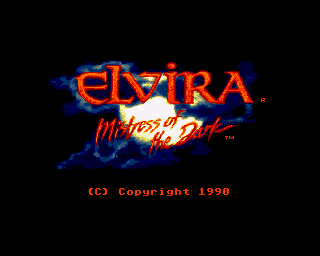 My very first Amiga remix. I decided to remix Elvira because apparently nobody did it before. Furthermore Elvira has such a cool soundtrack that it deserves to get remixed. That's my humble opinion. And of course it's a great game, too! If you played the game you'll know why I have chosen the text and what's it all about. By the way, if you're playing the game, just follow the first line of the second part and you'll easily get a good weapon...

Her name is Elvira

I guess she could be in bed like a tiger

She promised that she would do something for me

The only thing I have to do is get her free

So I only just went through the gate

but then the castle's dungeon was my fate

Will you just move your ass and go to work?

I grabbed the sword on the wall and started my fight

Until then I was struggling through the castle

with just a little hassle

Whether prison, mortuary or the park,

But I've got guts and Elvira's mixing spells

All you have heard were the enemies yells

Emelda is no longer a threat

I stabbed her down and now she is dead,

Cube shouts:
Elvira reminds me of orchestral music, and this is simply great modern music. I'll wait for a new rmx!

Crawler shouts:
Some parts are really good, some are not. I give it a very goodone cause I like the game!

Stqn shouts:
The sung parts are great, I just found the part between part 1 and part 2 a bit too long.
Reviews