It's a fact of life that sometimes people are just so much better than you are. No, it's true, you loser 😉

C64 remixing has a long history: certainly long enough to generate a backbody of work that guarantees you about 50 million Lightforces, more than a few Sanxions and a veritable Knuckle of Busters.

Anyway, it's a fact of life that there are some tunes you just shouldn't try to do. The reason is simple: the remixer nailed the piece so well that any subsequent remix of that piece will be judged harshly in comparison. A remix like this is rare, but is terribly influential.

Oddly, there are remixes which actually redefine the SID they cover, so that when people listen back to the SID after the remix, they hear the extra bits as missing, or hear the SID as bare, or just hear the SID in a completely different way.

The word I'm casually heading towards is definitive. This is my, personal but also based on observation, list. Bear in mind I might have missed some of the greats on RKO, so if you've got any suggestions of stuff i've missed, then put it in the discussion in the forum and I'll do a part 2 next month.

Sometimes a remix comes along where the only way a piece could be realised better would be to do the same remix but with better production values: like using a real orchestral But not all orchestral pieces are definitive. Sometimes the original SID wasn't suited to that style, or has had to work to accommodate it. Case in point are the orchestral pieces on BIT 3: Zoids and Flash Gordon aren't definitive, and neither is WAR, because the pieces have a lot more interpretations than orchestral. However, I firmly believe that Trap is definitive. Ben meant it to sound that way, and there are very few ways the piece can be interpreted without severe mangling. Oddly, the orchestral pieces do worse on Slay Radio than on RKO. Weird!

It's in no particular order.

Firelord, Ben meant as an orchestral piece, and here it is fully realised.

I'm sorry, there isn't a better way I can think of to do this.

It's done as Rob intended it with Rob scoring it, and it was always an orchestral piece. Just don't even try to compete 😉

Again, the only way to do this better could be to alter the detail or the production (although it could be longer).

Once there's a voice in there, magic happens.

Ironically beaten to definitivity in parts by Markus Holler's Fist 2 despite staying truer to the source material, but has all the subtunes.

It is the SID as it should have been. No more, no less.

The remix defines the SID. No one knew what the SID was capable of before this.

Reyn, in Nexus and Nexus II appears to have nailed many remixes and produced the definitive versions. Of course, Deflektor, Shape, Special Agent, Last Ninja 3, and others on the album are difficult to hear another way. On Nexus II, Pimple Squeezer and Bombo get nailed too.

When Makke lays a hand to something, he has a good chance of redefining the SID even though the end product is nothing like it. That's genius!

Although stylised, Marcel's choice of source material mostly ensures that he often redefines the SID, especially in his Sidologie material.

Much overlooked, but once he does a piece, I tend to think oh, well, that's it then!.

Lately he's defining everything in the Drax/Vibrants directory, but again I can't see how any of it could be done better. Great choice of material for the sound he's good at.

Even in his synth phase, there's something right about his remixes that makes it very difficult to think of the source material any other way.
My little gang

OK, it's immodest, but through my remixing career up to Karma I and my fellow remixing hacks were trying to realise the ultimate form of the SID tune I was covering. Monty on the Run, for instance. Rob Hubbard scored half of the BIT 1 version (which spilled over into Karma), or One Man and his Droid, or Phantoms of the Asteroid, Delta In-game, Return of the Mutant Camels 2... in that sense, I was actually trying to be definitive and working on pieces which to me had only one way of realising them. In some cases, we were realising the composer's own vision.

Now, this kind of list is always controversial because I've missed a ton of stuff, a ton of people, etc. Feel free to flood suggestions into the discussion that will start... now! And I'll revisit this next time with a D'oh, how could I forget so and so. But I might disagree... and I'm the
one with the fingers!!! 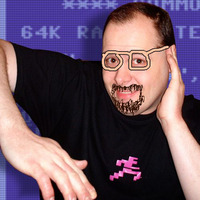 As for this chap, he here shows the definitive angle to look at life from - if you want to remain happy, healthy, Swedish and sexy. Or is it constipation? I guess we will never know!