Soundcloud will soon play host to a large number of individual tracks taken from Chris Abbott's many CD remixes, ready for remixers to re-remix (including commercially or for RKO) or just to enjoy or play around with. 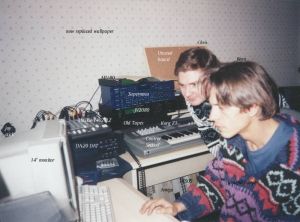 Chris and Ben, in the old days!

"Thanks to a new Soundcloud Pro subscription, I'm now fulfilling a promise I made to the scene last Christmas: to sort out my archive and to release stems of some of my remixes for general education and re-remix use. The first one up were some tracks for Arkanoid High-Score, and the second one up is Wizball from Karma 64 (which has some gorgeous tracks).

For Wizball, all the tracks are the same length (I presume that's normal for stems), so that they're easily superimposed. I intend to go through all of my source files and release everything that's releasable. There's some really gorgeous individual tracks here and there (both from me and other people) and I'd really love to hear what others do with them.

I'm also starting a new Charity auction set of items for Danceaway, where the lots will include the actual Cakewalk Sonar project (and associated WAVs) which were behind the DVD mix of Rob Hubbard's BIT Live performance in 2003. There will be other rare CDRs sent to me over the years. We're trying to raise more money for Danceaway (now Sidman 64) for accommodation and travel for Harley's physiotherapy next year that we raised the money for in the last charity auction. More about that in another news!