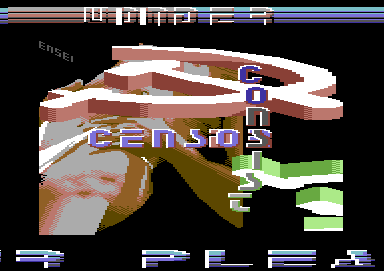 First time I heard this tune was in the Wonderland II demo by Censor Design.

I thought it was a great demo and I really liked the music by Edwin.

This is actually my second remix of this tune. First version was sent to RKO but I changed my mind and had it stoped before it was released.

I stoped it because I thought the mixing of it sounded really bad and it was like something was missing.

So this is my second attempt and this time I went back to the eighties (at least I tried to get that 80s feeling).

Psychonaut shouts:
Love the sampling of the iconic Jim Butterfield!

This is a very well-crafted remix. The way that alternative sounds are used to 'answer' the refrains of the main lead sound demonstrates an understanding of how to structure an arrangement. I like the 'patience' that you show in letting the intro lead us in... This may be an electronic pop tune but the soundscape is rich & finally; somebody programmes an actual drum-track, (rather than using 1 or 2 loops). I see your 'newcomer' tag but I suspect you have more experience than a newcomer. This is a remix by somebody who knows exactly what they're doing.
Review by LaLa

A technically well-executed synthwave style remix (I hesitate to call it an '80s remix, because it sounds so much better, more modern). Adding the voice samples was a touch of genius. Plus points for remixing a kickass 20CC tune that everybody else seemed to have ignored so far.