Amaurote (Get ready for action remix) 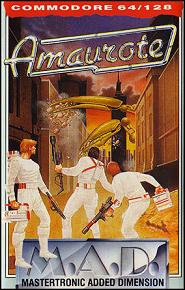 My first remix which was originally done in 2004 but was rejected at rko due to the lead being not up to standard. Any how I redid it and the track was released. Must confess that i first heard this track on the zx spectrum, It was a simple enough tune to have a go at my first remix and it was done in an afternoon...

Makke shouts:
Vert soundtracky and heavy. Not something I'd put on every day though.

eliot shouts:
Nice. Some fresh ideas. Not mainstream. The instrument-set does not catch my taste, so it goes only for yellow.

beldin shouts:
Would make much more sense as one piece of a full soundtrack!

Dumper shouts:
Has a nice punch to it, but becomes a little annoying for me.

hbasm shouts:
Good ideas here, well done. The snaredrum is the only thing that goes on my nerves because it goes on and on and on...

M.A.F shouts:
Amaurote isnt a game with inspiring tunes. This mix is a good version with what you had to work with. I like it!

omoroca shouts:
Could be used as background music for some PC ego-shooter war game. I hate those violent crappy games, especially their music.
Reviews