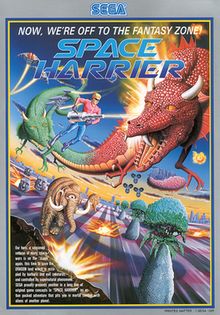 Here is an Arcade game which I spent a lot of money playing in the mid 80's. The Amiga's soundtrack for this game covered most, if not all of the arcade-machine's subtunes but sadly lacked the drive and feel of the arcade soundtrack. This 'Main-theme' which is familiar to one and all even had wrong notes & chords, (when compared to the arcade version). So, another opportunity to really make the Amiga's sound capabilities shine, was missed and the 'arcade experience' which Amiga owners were looking for, was diminished.

I always felt this tune could be a good one to remix with a little more drive and energy added. The genre kind of ended up somewhere between the 70's & 80's with some rock elements and some disco bits. I've added a good few chords to the arrangement which aren't in either the Amiga or C64 version; or it's Arcade predecessor.

It turned out okay, I think... but that's just my opinion.. What's your's?

Ryrynz shouts:
Oh my lord. Is anyone else basically after a version of this but with a bit more of a drawn out emotional vibe to it?

Peter set a standard with his cybernoid 2 remix and he's done it again with this version of Space Harrier. The bassline drives it throughout and the whole thing is uplifting & catchy. Mixing & mastering sound impeccable. Superb remix.
Review by Tomsk

Loving this version so much...there's plenty to keep everyone happy and put a smile on your face...from the amazing string work on the intro, to the clear and clever bass, and even a cheeky bit of ELO inspired vocoder. The guitar work through out is exceptional, and it should be one of your essential downloads here at Amiga remix too. I love it!
Review by Poppykuk

I initially just wrote a comment on this remix but I've come back so many times this year to listen to it again & again I felt I had to give it a little more love. What an uplifting remix this is, technically the instruments & the mix are 1st class. The arrangement is brilliant from the agile bassline to the disco-strings it's so good. And from a nostalgia point of view, this IS Space Harrier. It's what I heard in my head, every time I played the game. An outstanding remix from start to finish.