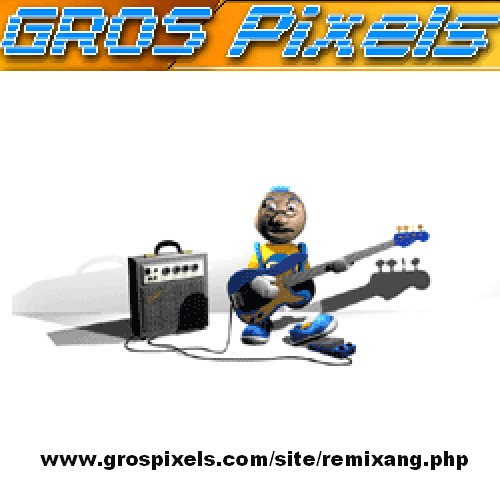 Grospixels is a french retro-gaming website created in august 2000, containing articles and features about games, systems and people from every time period in video games history. In 2003, the guys in the Grospixels team realised that several of them played an instrument and practised home studio. The idea of recording game music covers then started and we never stopped since. Games covered can be of any periods or origins. Musically, this is a very guitar orientated project since most of the musicians involved have a rock background.

- Maxime Noël (born 1983) : also known as Wild_Cat. Bass player. Has metal and prog-metal tastes among other things. Also plays with the VGM cover band The Tiberian Sons (who played at the MAGfest 2013) and has been associated to other french VGM remixers like CarboHydroM. Lives in Quebec.

- Laurent Roucairol (born 1971) : guitar player, occasional bass player. Mainly listens to rock, hard-rock or prog-rock artists from the seventies, and also some blues. Played in various pub-bands in the nineties but now doesn't have other musical project than Grospixels. Lives in Corsica island, France.

- Olivier Tamagna (born 1975) : also known as Ozzy. guitar player, occasional bass player. Has various tastes with a preference for heavy-metal and blues. Has studied and practised the playing of guitar shredders for many years before turning to a bluesier approach. Plays and sings in various pub-bands. Lives in Corsica island, France.

- Jean-Christian Verdez (born 1978) : also known as JC. Synth and piano player. Has the most eclectic musical tastes of the four (electronic music, classical, folk, rock, jazz...), and has started covering video game music earlier. Has composed and recorded a lot of music over the years that stays in the secrecy of his hard drive.

Goes without saying that the four of them have also been avid video game fans since the eighties and it won't stop tomorrow.

Grospixels is NOT a band. We never played a concert, never rehearsed and, in fact, we've never been in the same place at the same moment. It's a home-studio project and will stay so. We DO NOT have a drummer, all the drums on our recordings are programmed. We are not professional musicians. Songs that feature the four of us are not that many, unfortunately, due to our other activities, family life and job.

We use simple equipment :
- PC computer.
- As a workstation and sound interface, we've used for years the Maxi 64 card by Guillemot and the now abandoned software called Quartz Audio Master. Around 2008 we switched to FL Studio (ex Fruity Loops) and various sound interfaces.
- In the beginning the drums were programmed note after note and played with sound banks (or sound fonts). Since around 2010 the songs feature drums made with Toontrack's EZ Drummer. The programming is based on patterns provided with this software, not because we're lazy but because those patterns being done by real drummers it's more lively, it's not quantized, it gives the song a somewhat impredictable groove that it's a joy to adapt to.
- During the first years, guitars were recorded by miking a guitar amplifier and using real distorsion pedals. Then around 2007 we switched to guitar amp simulation, first by using a Behringer V-Amp, then switching to amp simulation plugins. We use a few of them and generally stick to freeware ones.
- Most of the production and mastering tools (compressors, reverbs, choruses, delays...) are the plugins provided with FL Studio Producer Edition.

One word about Remix 64 : from the beginning it's always been hard to receive positive feedback about our recordings. One of our recordings was rejected from a famous game remix website (the one that has judges you know) and our ego has since prevented us from submitting anything there again. The Youtube versions of our songs have a miserable number of views. On Soundcloud it's not much better. And the mp3 available on the Grospixels website are not downloaded that often. Then we tried to post some songs on Remix Kwed and we had the great surprise to see them rapidly published, they were very well accepted and received very nice and constructive comments. It pushed us to concentrate a little more on the Commodore 64 and Amiga music wich is a wonderful experience. So thanks a lot to all of you, the site maintainers and the guys voting, you helped us a lot and are one of the reasons we continue recording!