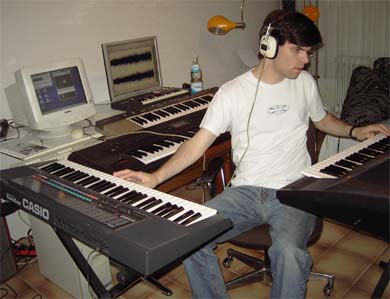 About me
Okay, I admit I didn't have a C64... I had a more or less exotic machine called "Schneider" in my home country (although on an international level, it's better known as "Amstrad").
Most of the C-64 games were converted to Amstrad, though - with the same (sometimes even a higher) sound quality.
My grandpa was a more or less famous piano player in Frankfurt (my home city in Germany) and left us an old piano on which I tried to play my favourite Amstrad games soundtracks. I never took any lessons, btw, I taught it to myself... frankly speaking, I can't even read or write notes or scores, but hey - neither could Chris Hülsbeck when he started to get into the business, and look where he is now!😉
Anyway, after a couple years, I got my Amiga which really set a new benchmark regarding sound quality. By this time, I had already turned from piano to keyboards, workstations, synthesizers etc - basically everything that deals with synthetic music.
Even today, in the PC era, I'm still a huge fan of Amiga and Amstrad games, and with my equipment now allowing me to do much better cover versions of the soundtrack of my favouite games, I thought it would be a good idea to sign up here at Amigaremix and remix64 to share the results of my passion with the rest of the world.
So, if you love music the way I do or if you spent days (and nights) in front of your C64/Amiga/Amstrad/whatever like I did... then consider yourself member of the group of people i create my remixes for!