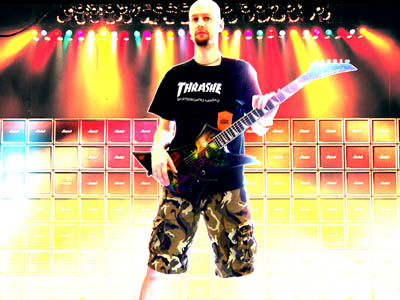 About me
Hi! My name is Eike and like most others here I wouldn't be making music if I had not been struck by the awesome tunes of Hubbard and Galway as a 14-year-old pimply speccy nerd!

That was also the reason why the ladies had to wait a few years longer til they could welcome me. ahemm...In the late 80s/early 90s I became a quite wellknown composer in the AMIGA-Scene with the demos of Red Sector and TRSI. My biggest hits were Boesendorfer p.s.s., Cream of the earth and some tunes of the RSI-Megademo (that IMO sound very awkward under today's aspects). In my later AMIGA-works I got heavily influenced by guitar music and a few years later on I left the machines behind for being a guitarist and performer.

Since then I played in a few metal/crossover-bands, having gigs, rehearsing, drinking, rehearsing, finally getting the chicks and drinking. Not to mention all the booze.

My approach to C64-Remixes: Using as many live instruments as possible, mainly bass and guitar of course but also drums and keys, if my time and skills allow.

Thanx to all the people who made this possible!
And never forget: music is fun and then a long time there comes nothing and then there comes fun again and then all the other things that may be important for being successful with music.

For additional remixes have a look at my collaboration projects:

3 Most Innovative Remix (c64 or Amiga)

2 Most Innovative Remix (c64 or Amiga)

1 Most Innovative Remix (c64 or Amiga)