Last saturday was the big night of the Remixer Of The Year 2009 award show. Presented by the SceneSat Radio staff, it was being broadcast by SceneSat Radio, SLAY Radio, Radio6581, BitJam and Nectarine Demoscene Radio simultaneously. The hosts were joined by a live crowd consisting of many surprise guests, among them former years ROTY winners and other scene VIPs, pushing Ziphoid's apartment space to its limits! The most entertaining 4 hour show did not only trace the musical highlights of 2009 and present the winners: with the joint broadcast it also opened up perspectives between the remixing community and the demo scene, both which are cloesly related, but have often been ignorant of the other in the past.

Congratulations to all winners and follow-ups, everyone, you've deserved it. As always: the ROTY lists contain only winners. 😃

Remixer Of The Year (c64 or Amiga)

Who made the best remixes in 2009? Who was most active and supportive?

For special achievements around the remixing scene during the years.

Most Innovative Remix (c64 or Amiga)

What remix really made a difference in 2009? Things you maybe never heard before? Creative and different takes on originals?

Who do you think deserves this award in 2009 for providing great remixes over a period of 5 years or longer? 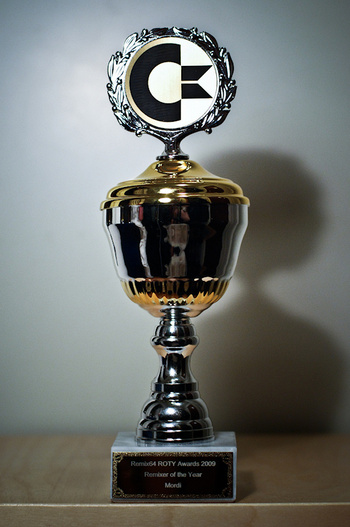 Remixer Of The Year - ROTY 2009 Trophy
(picture by NoirPhotographer)

Disclaimer: The results are based on votes made by the Remix64.com community. Errors and omissions excepted.

arrow_backRemixer Of The Year results